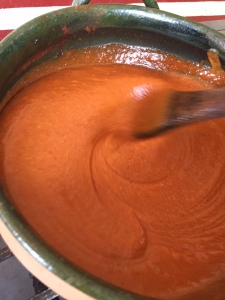 The yellow mole is the hardest one to find in Oaxaca.  It’s based on the rarest chile in Mexico called a chilhuacle amarillo. Chilhuacle peppers come in red, yellow and black. Red is the most common, the black is hard to find and the yellow should only be used for special occasions. It’s said to taste of lemon and pie spice which, when blended with the richness of hoja santa creates a perfect summer mole. Oaxacan chefs have long since learned to work around the problem of chile scarcity. That’s why most pictures of mole amarillo are redder than you would expect.

While it is often used as a sauce, mole amarillo is also frequently made into a soup with chayote, green beans and potatoes.  When you make a big pot of  this mole, you can use half of it for sauce and the other half for soup. By the way it’s easy to veganize this mole. Just use vegetable oil instead of lard and vegetable stock instead of chicken.  I’m recording it the way I learned it for posterity. See the Step by Step here

To make the mole:

Remove the stems and the seeds of all of the peppers.  Measure out all the stuff you are going to use and lay it all out on the table.  Blend in batches, adding wetter ingredients like tomatoes with dryer ones like cinnamon sticks to get a smooth blend. Reserve a little of the lard and all the masa or corn tortillas for later. Blend all ingredients and strain them with a medium mesh wire strainer into a large heavy pot.

Cook the mole, (some say “fry” the mole) in the large heavy pot on medium to high, adding fat as it cooks.  Stir frequently being careful not to splatter your hands.  The mole will change color as all of the ingredients meld together. Taste the dish. It should taste light and tangy with a finish of spice and butter from the hoja santa.

When you’ve got it how you want it, divide the mole into two pots. Add cut vegetables into one pot for the soup (chayote, green beans and potatoes are traditional) and continue to cook.

In the other pot, add masa or corn tortillas to the simmering sauce. Cook the mole until it is thick like mustard.  This masa is good with chicken, pork and pumpkin or anything that floats your boat.

This is a text widget. The Text Widget allows you to add text or HTML to your sidebar. You can use a text widget to display text, links, images, HTML, or a combination of these. Edit them in the Widget section of the Customizer.